In August 2019 the asphalt roadway was competed and the bridge opened to vehicles.

The bridge still requires coping stones and Armco barriers & other fencing to be installed. Services to a nearby property, temporarily diverted during the building works, need to be routed through new ducts in the bridge structure.

In addition, the former track diversion route around the western side of the bridge site is to be removed and the canal channel re-instated.

The rebuilding of Weymoor Bridge was started in 2014 when the groundworks were completed and the steel centring was installed. Centring is used to provide a temporary structure on which to build the brick arch.

Work on the project was put on hold during 2015 due in part to a change of landowner. The track that used to go over the bridge site has been diverted while the new bridge is constructed. This provides access to one residential property (at Latton Basin) and nearby fields.

The new bridge is a conventional looking red brick hump-back bridge, but with less of a 'hump' as far as traffic is concerned. The bridge will be similar in style to the original (see last photo), but will be capable of taking 44 tonne vehicles. The original would have had a weight limit of about 3 tonnes. This is the first new brick-built bridge to be undertaken by the Cotswold Canals Trust.

Visiting Site: For those wishing to visit the bridge site and Latton Junction by car, it is best to park on the road in Latton village and cross the A419 dual-carriageway on foot using the nearby bridge. The Weymoor Bridge site is at the far end of the bridge, with Latton Junction close by. For cyclists and walkers, the towpath here leads (west) to Cerney Wick and beyond. See link to map above. 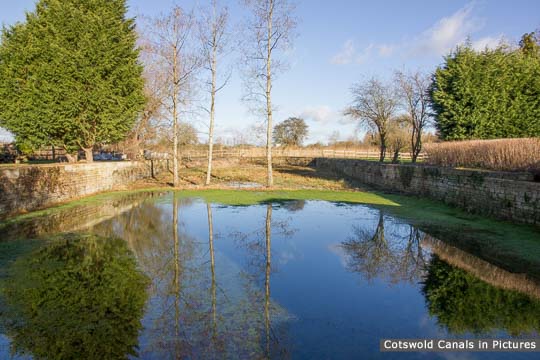