Also known as Phase 1b, the 'Cotswold Canals Connected' restoration section of the Stroudwater Canal covers a distance of about 6.1 km (3.8 miles).

This is between Ocean Railway Bridge in Stonehouse and Saul Junction, with its connection to the national waterways network. (See Phase 1b route.)

The main elements of the restoration include:

The most significant item in this section is the new railway bridge at Stonehouse. This was constructed by Network Rail at the end of December 2021, with supporting works ongoing until May 2022. Pictures of the bridge construction are here, and more information on the Ocean Bridge page.

The picture above has been produced by Cotswold Canals in Pictures using a Network Rail engineering drawing as a reference.

The four locks in this section (Newtown, Blunder, Pike & Dock) are in fair or good condition. Newtown and Blunder are operational, but Blunder Lock would probably require new top gates.

Dock and Pike Locks have been partly restored previously, but have not been operational since canal abandonment. Both require further repairs, paddle gear and gates.

There are three road bridges in this section; Bond's Mill, Roving and Pike.

Bond's Mill Bridge, once a swing bridge, was replaced in 1994 with an all-composite (plastic) hydraulically-operated lift bridge.

Bond's Mill bridge is no longer operational, and the proposal here is to replace it with a lift bridge similar to the one at Lodgemore. The refurbished bridge would be electrically operated.

Roving Bridge appears to be well maintained and carries a track over the canal.

Pike Bridge was rebuilt in 2005 and it is assumed that this is maintained by Gloucestershire Highways.

Oldbury Brook to A38 (the 'Missing Mile')

This section is often referred to as the 'missing mile' and was infilled when the M5 was built. The yellow items on the map below indicate where significant new structures are required, including a new canal channel under an existing M5 underpass used by the River Frome.

The Oldbury Brook originally flowed into the canal at Meadow Mill and flowed out again using the Meadow Mill spill weir.

After canal abandonment, a new deep channel for Oldbury Brook was cut through the canal line at the tail of Westfield Lock, and the canal is now infilled either side.

A new aqueduct will be constructed here to take the watercourse under the canal..

Westfield Bridge is in fair condition and carries a Public Right of Way (EEA/37/2) over the canal.

The lock, which has been infilled, suffered significant structural damage caused when the Oldbury Brook channel was constructed (see below) and will need to be repaired / partly re-built.

The original canal route between the A38 and Westfield Bridge/Lock was infilled when the M5 motorway was built, and is represented by the broken brown line on the above map. Also shown is the site of Hyde's Bridge - long since demolished.

A new channel would be cut along the approximate route indicated by the black line on the map. The route shown is indicative only, and subject to landowner negotiations & agreement.

A new lock would be required east of the M5 near Westfield Lock to lower the level of the canal to provide sufficient headroom through the River Frome M5 underpass.

To prevent the huge expense and disruption of constructing a purpose-built canal bridge across the M5, the preferred solution is to use the existing River Frome underpass.

A new concrete canal channel would be added alongside the river. As will be seen from the illustration below, the level of the canal would be lower than the normal river level, to achieve the required headroom.

A consequence of this solution is that during significant flood events the canal channel would be unusable.

A new lock would be constructed to replace the original, which was lost during road improvements associated with the construction of the M5 motorway. The replacement lock would have less of a fall due to the insertion of another new lock east of the M5 to lower the level of the canal under the motorway.

The original route of the canal now bisects the large A38/A419 roundabout at Whitminster which is in the top left corner of the above map.

In 2020 two new canal bridges with a channel between, as indicated on the above map, were constructed by Gloucestershire County Council. This has removed one of the major route obstructions on this section of canal.

A38 (Road) to Saul Junction

An oil pipeline crosses the canal near Occupation Bridge which blocks the navigation. This is to be re-routed under the canal bed, and this work was expected to be completed before the end of 2021, but may now be in 2022.

Occupation Bridge: This carries a farm track over the canal and appears to be in good condition.

Stonepitts Bridge: This former farm access hump-backed bridge has long-since been demolished. A Public Right of Way (EWH/21/3) crosses the canal here. This is likely to be replaced with same bridge design as Whitminster, described above.

Whitminster Bridge: Adjacent to Whitminster Lock this was once a farm access swing bridge, which is no longer operational. A Public Right of Way (EWH/21/3) crosses the canal here. This will likely be replaced with a manually-operated lift bridge similar in design to Lodgemore Bridge in Stroud, except it will have two overhead balance arms, not one.

Walk Bridge: This low-level road bridge is the first major obstruction when travelling east from Saul Junction and would be replaced with a high-level fixed bridge.

East of Whitminster Lock for a distance of about 660m the canal line, which used to run parallel to the River Frome, has been lost. Near the point where the canal reappears there used to be Lockham Aqueduct which carried the Frome under the bed of the canal.

The restored canal is likely to share the river course along this stretch, which was in fact the case when the canal was first built. (The canal was later separated to avoid constantly silting-up.)

Partly restored by the Cotswold Canals Trust in the 1990s, but not gated. This lock would require some additional modifications for flood risk alleviation. Under the proposed scheme the lock will be entered from the River Frome when travelling from Stroud to Saul Junction.

In April 2018 Stroud District Council were awarded Round One Development Funding (about £0.8M) from the National Heritage Lottery Fund (NHLF). This was in response to an application submitted to the NHLF in November 2017 for about £8.9M towards the cost of Phase 1b, estimated at £23M.

In addition to the NHLF funding, financial support will come from:

A successful final-round grant application was submitted to the NHLF in May 2020 which resulted in a funding award for £8.9M being announced in October 2020.

Cotswold Canals Connected from the Air 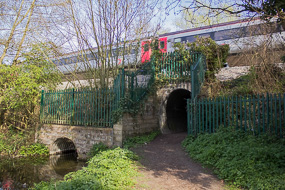 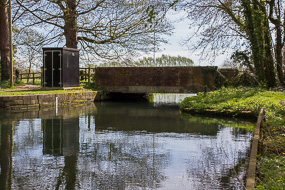 And ends at Walk Bridge, near Saul Junction.

Cotswold Canals Connected from the Air

A photo gallery by Ken Bailey.

Feedback on the app is welcome!