Milestones of the Thames & Severn Canal

A feature of the Thames & Severn Canal that does not appear on the Stroudwater Navigation is the milestone.

It is believed that 52 milestones were originally positioned at half-mile intervals along the canal. However, the first one appears to have been at Bowbridge which is one mile from the start of the Thames & Severn at Wallbridge in Stroud (see photo 1 in right panel).

In 2017 however, this apparent oversight was corrected when a new milestone was installed at Capel's Mill by the Cotswold Canals Trust, at the first half-mile mark (see banner image).

This article focuses mainly on milestones on sections of the canal towpath between Wallbridge in Stroud and Eisey near Cricklade, where a public right of way exists.

Originally, each milestone would have had a cast iron plate attached stating the distance from 'Walbridge' and 'Inglesham' in miles. The total distance should add up to 28¾ miles, the length of the canal. (Note the use of a single 'L' on all plates in the spelling of Wallbridge.)

Unfortunately, none of the original milestones that can be seen today have their original plates in situ. However, milestones on the restored section of the Thames & Severn canal between Wallbridge and Hope Mill now have replica plates fitted - four in total.  (This includes the new milestone at Capel's Mill mentioned above.)

In 2019 four more replica plates - cast by DM Foundries of Thrupp (near Stroud) - were fitted to milestones between Wildmoorway Lower Lock and Latton.

A number of original and replica plates are in museum collections including the Museum in the Park (Stroud), Corinium Museum (Cirencester) and the Gloucester Waterways Museum. However, only some of these are on display. The Cotswold Canals Trust are also custodians of several plates. 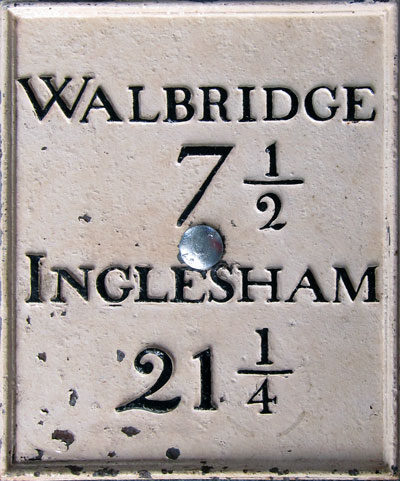 Locating surviving milestones can make for an interesting aside whilst walking the canal towpath.

On this section of the canal today there are 12 milestones, with the first being just west of the Capel's Mill railway viaduct (Walbridge ¼ Inglesham 27½, as shown in the banner image).

There are several original stones missing in this section:

The last milestone in this section is right up against the Daneway portal of Sapperton Canal Tunnel (Walbridge 7½ Inglesham 21¼). The plate from this stone is in the care of the Cotswold Canals Trust (see picture above).

There were no milestones either inside or on the route over Sapperton Canal Tunnel. This accounts for Walbridge 8, 8½, 9 & 9½ in the numbering sequence.

At Coates there are 2 milestones between the portal of Sapperton Canal Tunnel and Trewsbury Bridge. These would have been the Walbridge 10 and Walbridge 10½ stones.

The canal between Trewsbury Bridge and Siddington Bridge is private, except for a 300m infilled section approaching Blue House Bridge, near Ewen.

Between Siddington and Eisey there were originally 13 milestones. Again, a number of these are missing:

The last milestone in this section is between the A419 and Ampney Brook Aqueduct, which is the furthest point east that the public has a right of access over the canal route (Walbridge 21½ Inglesham 7¼).

Fortunately, the last milestone on the Thames & Severn Canal at Inglesham (Walbridge 28½ Inglesham ¼) has been preserved with its original plate intact. This is now in private ownership, although no longer at its original location (Photo 7).

It is hoped that more replica plates can be manufactured and fitted at other locations along the canal in due course. If anyone would like to sponsor a plate, Jon Pontefract from the Cotswold Canals Trust would very much like to hear from you.

If anyone knows what happened to any of the other missing milestones or original plates, whether bulldozed into the canal during infilling or now privately owned, Jon would also like to hear from you. This all helps to build the historical record.

Jon Pontefract can be contacted by email at pontefractj@gmail.com.

For those with a wider interest in milestones, The Milestone Society website is well worth a visit. (www.milestonesociety.co.uk) 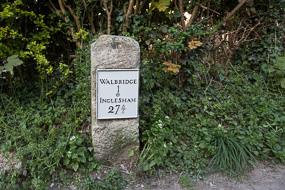 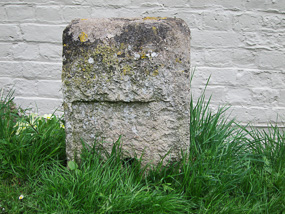 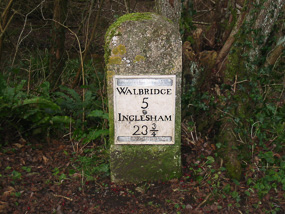 3. 'Round top' stone east of Valley Lock with replica plate 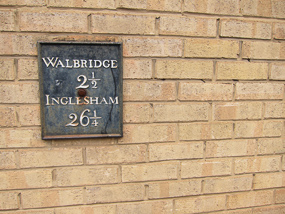 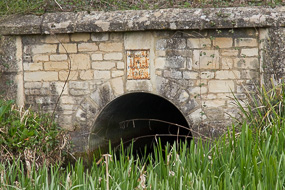 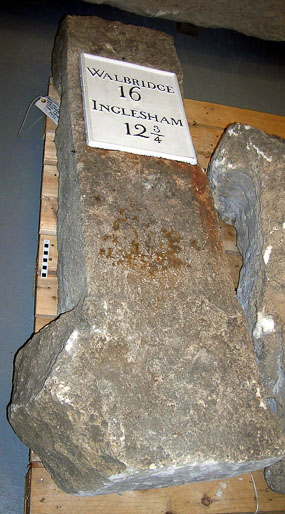 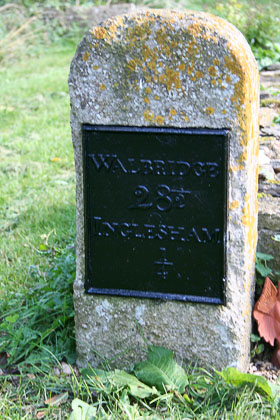